Politicians, as we are all aware, are skilled at manipulating policy and promise to appeal to national interest as well as serve their own success. This is nothing new. Trump, however, is not a politician and has neither deftly nor adeptly concealed his utter recklessness in his latest blunder: breaking all precedent and recognizing Jerusalem as the capital of Israel.

America recognizing Jerusalem as Israel’s capital is the equivalent of an ostrich digging its head into the ground, hoping this one definitive statement will make everything go away. Trump has willingly and unnecessarily shifted the status quo of one of the most volatile political dilemmas of our time. Attempting to unilaterally resolve a final status issue, in blatant contradiction to prior legal agreements, does not move the peace process forward. It throws it into anarchy. What little expectation we had left of some kind of direction for the conflict is gone. And now what? A rogue America and the loss of a mediator.

This move is founded in a lack of understanding, an absence of wisdom, and an erratic desire to make big, loud movements. Let’s be clear: he did not declare Jerusalem the capital for any desire of supporting the “peace process” or ending the conflict. He did it for show. It was an easy win to champion to his base, a high-benefit low-cost scenario.

The Positives for Trump:

The Risks for Trump:

The loss of Palestinian support and the one-sided nature of Trump’s new Middle East stance largely does not affect the US President’s legacy. And furthermore, any violence or protests on the ground is outside of US jurisdiction and responsibility, so really, who cares if a Palestinian human dies?

What frustrates most is that this simply was not an area in which the USA should have intruded. The status of Jerusalem was labelled a “final status issue” under the Oslo Accords of 1993.

From left to right: Prime Minister Yitzhak Rabin, President Bill Clinton, and Chairman Yasser Arafat at the Oslo Accord signing in Washgington, DC

“But Oslo is long dead!” you may cry. Indeed, any semblance of a peace process has massively deteriorated since the 90s. But the language and the principles of the Oslo Accords have guided all following negotiations and political initiatives. Any leader of the United States, the country who has historically acted as mediator between parties, is well aware of the concept of the final status issues.

These issues also include: the settlements, the borders, water, refugees, and security. At Oslo, these highly inflammatory subjects were all bound into one and branded “FOR FUTURE NEGOTIATION BETWEEN THE PARTIES”. A common criticism of the Oslo Accords was this very move in leaving the most important parts for later, a time which would never come. But there is still some sense to it. The underlying principle is that these final status issues were of primary and equal importance to the parties of the conflict, and as such they must be the ones to resolve them. If these issues are not being resolved, that is the responsibility of the parties.

America has thoroughly stepped out of its bounds in this ridiculous move. It has sided with one party’s stance. It has brashly made a claim on an issue, on a city, no other country would touch. In rejecting the complexities of conflict, Trump has abdicated America’s status as a viable mediator. 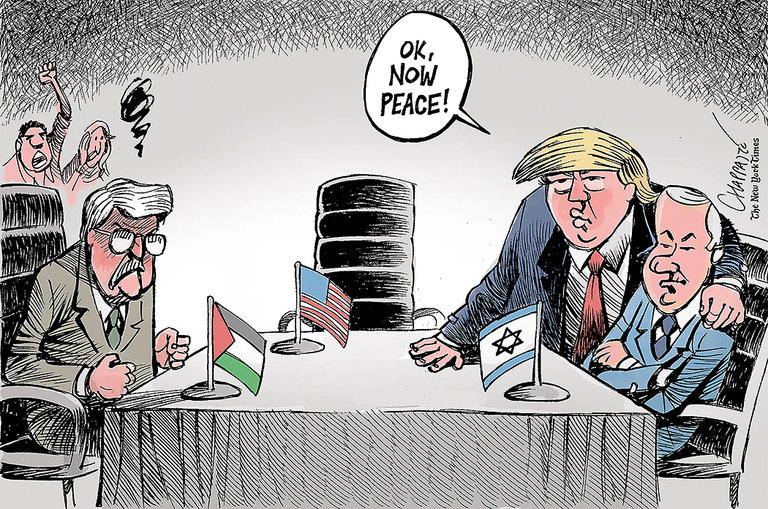 This is no doubt an acceptable cost for those who have always considered Jerusalem as Israel’s capital. But the very purpose of the mediator is not to offer any kind of victory to either side. For a mediator to choose a side in a conflict is to perpetuate the conflict, instead of trying to seek a greater good: co-existence, some degree of resolution, some modicum of negotiation and communication.

With America out, there is a desperate vacuum. Without a mediator, negotiations are dead on arrival. Without negotiations, a two-state solution has truly become laughable. The state of interactions between Israel and Palestinians will cascade into further entropy.

There were already so few options for a mediator that could be reasonably trusted by both Israel and the Palestinians. Certainly not the EU, and certainly not any Arab players. We could potentially see greater involvement from Russia and East Asian nations, which have already been stepping up in the Middle East and the Pacific to fill the gaps that Trump has ignorantly left behind. Russia has previously been in talks with Hamas, and China has shown greater interest in taking part in the peace process, and rumors are beginning to swirl about an increased Saudi involvement. Considering these options, it is safe to say that the conflict is likely to shift away from liberal human rights rhetoric, and towards something closer to a realpolitik fueled by explicit state interests (Russia’s quest for influence, China’s quest for trade, and an anti-Iranian coalition at the cost of Palestinian rights), a strategy that does not bode well for the people on the ground who must endure the consequences alone.

Meanwhile, Donald Trump will sit in his oval office, basking in the adoration of his voters.